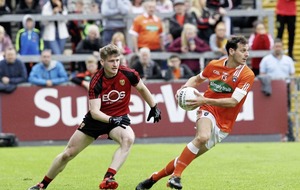 FORMER Down forward Conor Maginn has backed the Mournemen to kick on in 2021, despite the disappointment of that Ulster Championship exit to comeback kings Cavan.

Paddy Tally’s side were 10 points up at one stage back on November 15 before crumbling as the Breffnimen piled on the pressure after half-time – Mickey Graham’s side going on to win by a point before stunning Donegal in the provincial decider to end a 23-year wait for the Anglo-Celt Cup.

However, 2020 also saw Down secure promotion back up to Division Two, while there were plenty of other positives to build on as Tally’s young side look into this year.

They will do so without Maginn, who has brought the curtain down on his 11-year county career, but the Bryansford stalwart hopes to see further progress from the Mournemen.

“Look at the first half [against Cavan], Down could have been out of sight. If they’d taken one of the other goal chances they might’ve cruised home in that game then went in against Donegal.

There’s loads of potential, there really is… I’m actually looking forward to being a fan this year and going to watch them, if we’re allowed.

“They’ve a very exciting forward line and Paddy will always have them well organised defensively. Getting back up to Division Two is big as well, going up to that level will help bring the squad on and hopefully see us being competitive at Ulster Championship level.

“Seeing what Cavan did will have given all the other counties a boost, and should be something that spurs Down on to try and do something similar.”

Maginn had been one of the county’s main creative forces over the past decade as they battled to make a mark on the Championship scene, and his departure from the panel leaves captain Darren O’Hagan, Kevin McKernan and Benny McArdle as the only survivors from the run to the 2010 All-Ireland final.

Named Down supporters’ club player of the year in 2014, classy playmaker Maginn was also a pivotal figure as the Mournemen saw off Armagh and Monaghan en route to an unexpected Ulster decider appearance in 2017, falling to Tyrone at the final hurdle.

Under Tally though Down have favoured the raw pace of men like Liam Kerr, Barry O’Hagan and Ceilum Doherty in the half-forward line, and Maginn felt the time was right to bring his county career to an end.

“I pretty much knew towards the end of last season.

“Obviously I’d only really played a fairly minor role towards the end of last season, I wasn’t really featuring in the Championship run so I had a conversation with Paddy and it was mutual probably.

“They’ve a great forward line, a lot of pace, so my time has come to an end. It’s the way the game has evolved - you look at the current Down team, it’s full of pace. There’s still a place for all sorts of roles but maybe just the way Down play, the running game requires boys to have a lot of pace

“It was a tough call to make of course, it plays on your head because you always want that big day in the Championship, and we never got that bit of silverware we’d all have craved.

“For me though, it’s just time to move on. I’m looking forward to the next stage now, concentrating fully on Bryansford.”